Since its creation, INSA Lyon has been committed to diversity and allowing all sectors of study to access engineering education. The theme of gender equality is of major interest to the institution, as evidenced by the fact that its policy and actions won the 2016 award for the engineering school with the highest level of commitment from the Conference of Directors of French Engineering Schools.

The gender issue is thus addressed from several perspectives at INSA, thanks to the expertise of the Institut Gaston Berger and the commitment of a number of the institution's actors.

Since 2016, various research projects have emerged at INSA on gender diversity and equality issues. The Institut Gaston Berger proposes to host and deploy these studies within the framework of a dedicated institutional Chair, supported by the INSA Lyon Foundation and the companies Assystem, EDF and Safran.

Whether with young students, as part of its partnerships with secondary schools, or as part of events for the general public on campus, the Institut Gaston Berger organises numerous events each year to address gender issues in science. While, in 2017, a high-profile operation was carried out to honour great female scientific figures by making them visible in each INSA building, 2018 was marked by a BarCamp highlighting the voices of secondary school students and researchers on the place of women in computer science: Computer science: why not me? and Computer science: why not them?

In 2018-2019, a series of events was held throughout the academic year to bring together students, staff, external companies and organisations, and secondary school students around 4 themes: violence against women, women and girls in science, women's rights, and LGBTQI+ rights. 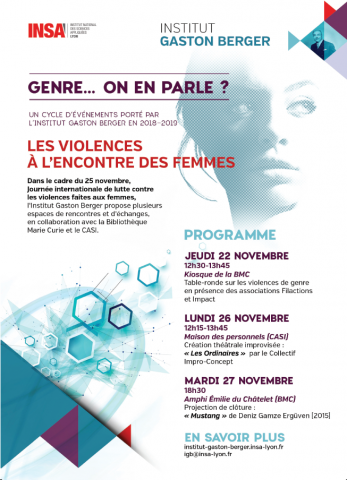 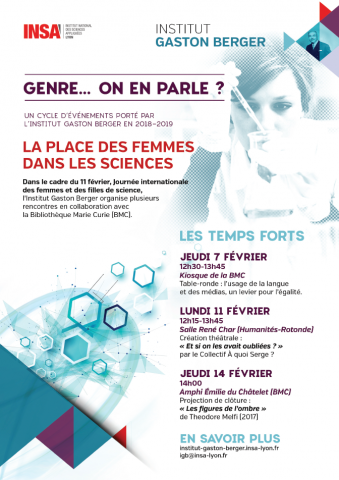 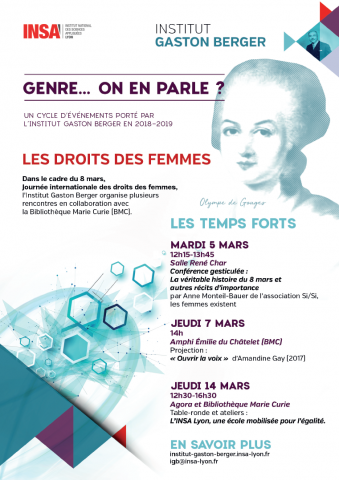 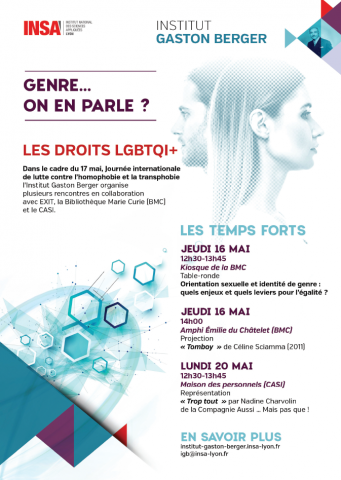 Since 2018, optional courses on gender have been offered to students in the Mechanical Engineering, Electrical Engineering and Materials Science and Engineering departments as part of the à la carte courses offered by the Humanities Centre. This programme, which aims to bring together the engineering sciences and the humanities and social sciences around major societal issues, will be gradually rolled out to all INSA Lyon departments, for engineering students in years three, four and five. This course was nominated as one of three finalists for the Gender Equality Teaching Prize in the CDEFI's (Conference of Directors of French Engineering Schools) Ingenious'18 competition.

After three semesters of courses, the results are very encouraging and the feedback very positive:

"I’d say this course has fulfilled the expectations I had a few months ago. It opened my mind and gave me clues to do the right thing. Indeed, in order to deal with problems that are so deeply rooted in society, such as gender, you need to have a holistic view of the situation. A course like this is an eye-opener. It helps you realise that this is not past history but that it should be. Most importantly, this course, through dialogue, allowed some people to discuss things they would never have thought of. So, yeah, I don't have the same thought in my head when I hear about gender today as I did five months ago. I’d say that this course has therefore served its purpose in making me discover a reality about which I was only guessing. Making me understand that I had the opportunity to help eliminate this inequality. Even on a scale I never imagined. Finally, I feel like I now have to pass on this knowledge to others and that is, for me, a sign of personal awareness. I hope the rest of the group feels the same way’.  4th-year mechanical engineering student, 2018

Engineering students have access to a large number of support systems at INSA for their first steps in higher education, their training projects and their career plans. The Institut Gaston Berger thus offers a mentoring programme between professionals and students and works in close collaboration with the student social services department of the FIMI department, and the Humanities Centre within the framework of the PPP (Personal and Professional Project). This regularly leads all these teams to question underlying gender issues in order to develop appropriate training and support modules.

In addition, several student associations have approached the Institut Gaston Berger to help them carry out an integrated and cross-cutting approach to equality.

The Institut Gaston Berger therefore represents, at INSA Lyon, a resource structure and a major support in the implementation of projects aimed at learning about and disseminating a real culture of gender equality.

Are you initiating a project, meeting or event on this subject? Would you like to show your interest in these topics (PPH, various commitments) and/or be a volunteer to support us in our future events?
Do not hesitate to contact us to share your ideas, motivations and feedback: igb@insa-lyon.fr.

Digital: let’s go all out!

On the occasion of 8 March, 15 days of events around the presence of women in computing and digital technology.